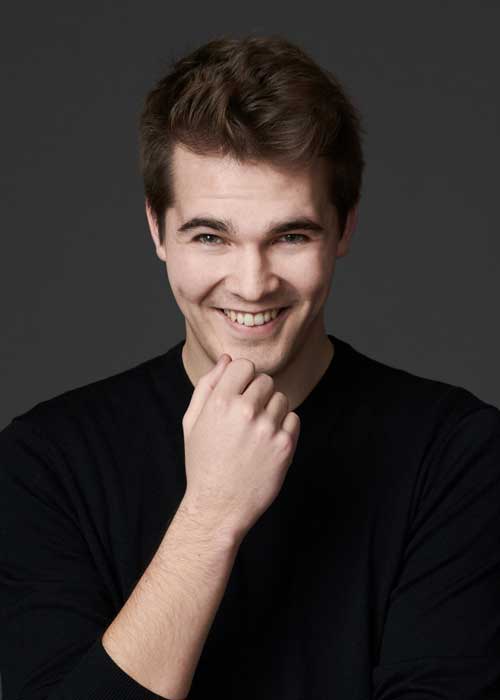 Perttu Pölönen is an inventor, entrepreneur and composer who has won EU’s biggest science competition for youth and studied future technologies at Singularity University, based at NASA Ames Research Center in Silicon Valley.

In media Perttu has been called a fearless inventor and a super highbrow –in 2014 he was given the Most Creative Finn Award at Slush and in 2018 MIT Tech Review honored him among the 35 Innovators Under 35 in Europe.

Bio:Perttu Pölönenis an inventor, futurist and a composer who has won the European Union’s Competition for Young Scientists and graduated from Singularity University, a think tank located at the NASA Ames Research Center in California.

He is a walking example of an interdisciplinary person. Perttu is originally an academically trained composer from Sibelius Academy, but has also studied exponential technologies in Silicon Valley. He has been working as a disruption analyst for a management consultancy firm and established a non-profit, 360ed, that helps teachers in Myanmar improve their pedagogy skills using virtual reality technology.

Perttu’s invention, MusiClock, is an example of how a personal challenge can be turned into an internationally awarded and patented product and a startup. The MusiClock mobile app has been featured by Apple and became #1 music app in over 10 countries. In the main Finnish media, Perttu has been called a highbrow, genius and a fearless inventor, who has even attended the Nobel festivities in Stockholm. In 2014, he was named the most creative Finn at Slush and in 2018 Perttu received two recognitions: Nordic Business Forum’s 25 Under 25 in Nordics and MIT Tech Review 35 Innovators Under 35 in Europe.

Perttu is an inspiring speaker who talks about disruption, megatrends, exponential technologies and their tremendous impacts on people, organizations and the future of education. Perttu’s presentation is a dynamic combination of disruptive thinking from Silicon Valley and empowering optimism from a millennial. Perttu has received excellentfeedback on his ability to encourage his audience to face the challenges of the future, but also its unprecedented opportunities. The world is open to the person who understands the evolution of technology. Perttu believes that everything is possible when nothing is certain. Future challenges require disruption -a development that revolutionizes the present.

Perttu aims at shaking prejudices and provoking thoughts on the changes brought by new technologies. What does disruption mean? What does exponential growth feel like? What makes us different from computers and machines? Perttu is an energetic speaker who encourages his audience to face the biggest technological and societal questions of our time. We need a human revolution! Perttu received the Newcomer of the Year Award in 2018 at the Speaker of the Year gala in Helsinki.