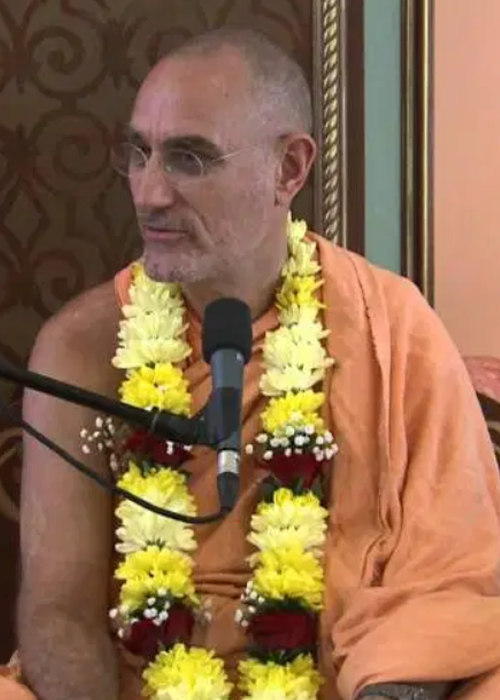 His Holiness A.V. Bhakti Vidya Purna Swami – D.Theol.h.c., Prof.Div. (alias Alan Ross Wexler) finished his basic studies in Oregon, USA, where he decided to follow the life of a monk and study
the ancient Vedic Scriptures from India, under the renowned scholar and Gaudiya Vaishnava Guru, His Holiness Srila A.C. Bhaktivedanta Swami Prabhupada the Founder Acharya of the International Society for Krishna Consciousness (ISKCON).

He spent his first year being trained in the USA, thereafter he moved to India to increase his practices and studies. He spent one year in Thailand and Hong Kong lecturing and performing services for ISKCON. He then moved to Kolkata, India, where he managed a temple and monastery for more than a year. In 1976 he then moved to Mayapur, India, the headquarters of ISKCON where he served as one of the main priests of a community of 3000 members and the principle of the Bhaktivedanta Academy, a monastery school providing primary, secondary, tertiary and quaternary education.

In 1987 he entered the Sannyas order, the higher priestly title in the Indian tradition. In 1998 His Holiness entrusted his senior students as principles and managers of the Bhaktivedanta Academy and focused in developing higher studies an curricula for different branches of knowledge of the Vedic scriptures, service that he is still doing.

During all this years, His Holiness also travelled to more than 40 countries, lecturing to thousands of people involved in all spheres of life, including academic and government circles. As the main
inspiration and teacher of the Bhaktivedanta Academy in Mayapur, India, he mentored thousands of students from more than 50 countries.