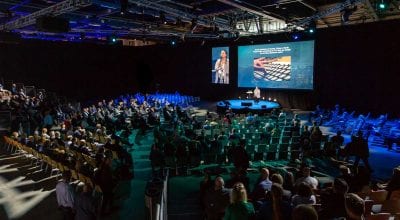 Graham Cluley, Marja Dunderfelt, Rik Ferguson and Mikko Hyppönen have been confirmed as keynote speakers at Cyber Security Nordic 2022. Once again, the event will delve into the politics, economy, reality and future of cybersecurity. The themes are presented from the business economy as well as the public administration perspectives. The Cyber Security Nordic event will be organised for the fourth time at Messukeskus in Helsinki from 8-9 March 2022.

The Cyber Security Nordic event is aimed at cyber security professionals, business management and experts. The entire programme of the event will be released soon, but four top speakers have already been confirmed.

Two keynote speeches under the theme Future of Cyber Security

The Future of Cyber Security keynote speakers are Rik Ferguson, Vice President of Security Research at Trend Micro and Mikko Hyppönen, Chief Research Officer at F-Secure. Ferguson will focus on Project 2030: Scenarios for the Future of Cybercrime. Hyppönen will speak on the subject of Waves of the Internet Revolution. After the presentation, the two top experts will discuss the challenges and opportunities of cybersecurity.

Ferguson is one of the leading experts in information security. He is also a Special Advisor to Europol EC3,and a project leader with the International Cyber Security Protection Alliance (ICSPA). Ferguson is actively engaged in research into online threats and the underground economy. Rik Ferguson holds a Bachelor of Arts degree from the University of Wales and is a Certified Ethical Hacker. In his keynote speech, Ferguson unveils the results of the Project 2030 research project. They show what the world could look like at the beginning of the next decade and how the security sector could respond to the ever-evolving innovations in cybercrime. The results show how connectivity, data and artificial intelligence are changing society and the way we live, work and act.

Mikko Hyppönen is a worldwide authority on computer security and the Chief Research Officer of F-Secure. He has written on his research for the New York Times, Wired and Scientific American and lectured at the universities of Oxford, Stanford and Cambridge. He sits in the advisory boards of EUROPOL and the Monetary Authority of Singapore. This year, Hyppönen has published the book Internet. In his keynote speech. Hyppönen talks about the internet, which in many ways is the best and the worst innovation during our lifetime. Global networks are under threat and it must be possible to do something about it.

The deeply interconnected systems running a smart city, pose a real threat to an entire ecosystem built on technology. IoT offers new opportunities for cities to use data for different purposes. At the same time, consumers are surrendering their privacy – without realizing it. Cybersecurity challenges in smart cities don’t yet get enough attention from developers and city leaders, but it’s an issue which must be addressed now — waiting won’t be an option. This will be presented by Cyber Security & Privacy Officer Marja Dunderfelt from Huawei Technologies in her keynote speech.

The theme Not all Cybercriminals are Evil Geniuses will be opened by keynote speaker Graham Cluley, a Security Award winning blogger. In his speech, Cluley talks about the actions of the hackers and the mistakes they have made. Through mistakes, scams and crimes have become easy to identify and have led to arrests.

Cluley has been a well-known figure in the computer security industry since the early 1990s when he worked as a programmer, writing the first ever version of Dr Solomon’s Anti-Virus Toolkit for Windows. Since then, he has been employed in senior roles by companies such as Sophos and McAfee. Graham Cluley has given talks about computer security for some of the world’s largest companies, worked with law enforcement agencies on investigations into hacking groups, and regularly appears on TV and radio explaining computer security threats. Graham Cluley was inducted into the Info Security Europe Hall of Fame in 2011, and his claim to fame is that he is the originator of the saying “The cloud is just someone else’s computer”.

A Forecast Of The Cyber World